Fishes come in multiple types, whether it?s a freshwater fish or a saltwater one. Some of them vary in color, size, weight, and shape creating a unique individuality and identification of each species.

But some fish species are very similar that most of us won?t even notice the slightest difference between them. Such examples of fish are the bluegill and the sunfish, which many of us mistakenly interchange both terms.

But don’t worry, I will tell you how to identify the very exact species we just caught. The identification of different kinds of fish is one of the few challenges that anglers must face and master to further enhance and improve fishing skills.

And by starting to identify the difference between a bluegill and a sunfish gives you an edge, for knowledge is power.

The information that I’ll be sharing with you, Bluegill VS Sunfish: Comparison to two of the most mistakenly interchanged fish terms, will help to clear any confusion between the bluegill and sunfish by providing an in-depth comparison of their classification, characteristics, features and other markers that sets them apart.

Since the bluegill is just a type of sunfish, we’ll just compare it to other common sunfish species such as the pumpkinseed and redbreast, in which bluegill is usually mistakenly identified.

Sunfishes, commonly known to us anglers as sunnies, belong to the order of Perciformes under the Centrarchidae family.

The Sunfish under the Lepomis genus is considered to be the True Sunfish. Under the genus, we have 13 species including the following: Redbreast, Green sunfish, Pond perch, Warmouth, Orangespotted sunfish, Bluegill, Pumpkinseed Sunfish, Dollar sunfish, Creek perch, Redear sunfish, Red-spotted sunfish, Spotted sunfish, and the Bantam sunfish.

Therefore it is safe to say that all bluegills are considered sunfishes, but not all sunfishes are considered bluegills. Members of the sunfish family are also known as bream, brim or perch and are classified as carnivores with nest-building habits.

Bluegills can be quickly identified by spotting a black dot located at the back end of its upper dorsal fin. This characteristic alone separates it from other types of sunfish, which lacks this dorsal coloration.

It has a black earflap (operculum), while its cheeks and gills have a blue shade coloring. Its belly color ranges from white to light yellow. The bluegill has an oval body, has a small mouth with small teeth.

A pumpkinseed sunfish possesses a long, pointed pectoral fin and also has a small mouth like the bluegill. Pumpkinseeds have molar shaped teeth called pharyngeal teeth, located in its throat.

A bright red or orange strip is located on the edge of its short, black ear flap. The redbreast sunfish has a flattened body and more elongated compared to other sunfish species.

You can find its teeth on the roof of its mouth. A stream of blue lines can be found on its face or cheek area. The ear flap (operculum) or gill cover has a long and narrow black lobe. Adult males tend to have a longer and narrower ear flap than that of a longear sunfish.

It has short and roundish pectoral fins and their opercular flaps tend to be softer and flexible compared to the rigid flaps of a pumpkinseed sunfish.

Bluegill vs Sunfish: Size and Weight

According to the South Carolina State record, Bluegills weigh about 3 to 4 pounds each while both pumpkinseeds and redbreasts weigh more or less 2-pounds each.

Bluegill vs Sunfish: Color and Patterns

Bluegills that are young or nonbreeding have a light gray or olive color, having several darker brands on its body. Breeding bluegill males tend to turn darker in color, showing a dark blue to purple tone on its upper body portions and also have bright red or orange belly markings.

Female bluegills tend to have a duller color than males and are often called yellow breast. Pumpkin seeds are known to be one of the most brilliantly colored fish among the sunfish species.

An adult pumpkinseed is olive green in color, spotted with blue and orange, streaked with gold markings along its lower sides. Females and young ones possess dusky chain-like bar markings on the sides of its body.

During spawning season, males display deep bright orange-red bellies, while females possess orange-yellow bellies. Both males and females possess vertical rows or red-brown markings to orange spots to the sides of its body and sometimes be found tapering on the edge of its tail or caudal fin.

Its caudal fin is usually an orange-red color. 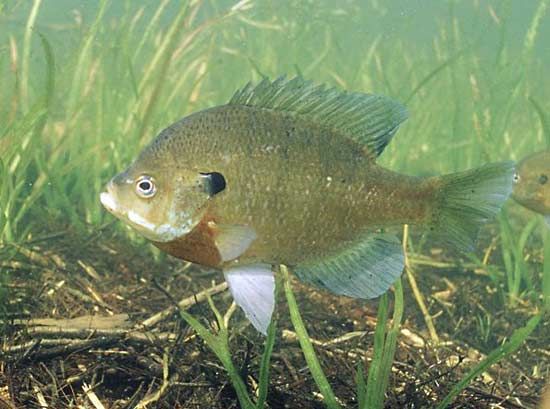 Redbreasts can also be found in areas with rocky points, woody debris, undercut banks, stumps, and shoreline riprap with a preference to sandy bottoms. But unlike bluegills and pumpkin seeds, they avoid heavily vegetated areas that are stagnant.

Differentiating bluegill from other sunfish species might be hard at first, but with proper practice, determination and focus, the identification process will just come naturally to you. Just take note of the markers and you’ll be a pro in no time. There you go, folks! You can now identify and properly distinguished whether the fish you just caught is a bluegill or a different type of sunfish.

Do you like this post? If you do, feel free to share this article with other aspiring anglers out there, so that you can help them clear the confusion between a bluegill and a sunfish. If you have anything to share, add, or ask, please feel free in the comment section below.

What Do Minnows Eat? (Know All There Is About This Tiny Creature)